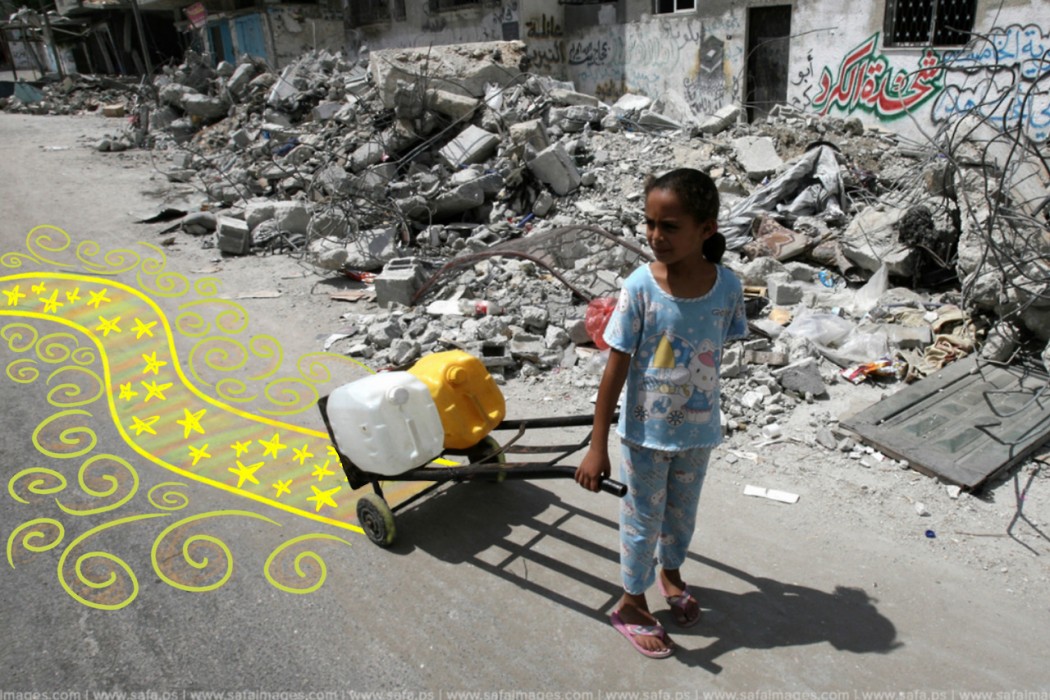 In recent weeks the conflict between Israel and Palestine has been the subject of attention, particularly for its tragic harm to children and other innocent citizens who live in the war-torn region.

Artist Haneen Nazzal, who lives in Palestine, has created a profound and humanizing look at the conflict in Eid in Gaza. She has taken photographs that appear to be originally produced as photojournalism, and she made them even more poignant by drawing brightly-coloured additions on the photos. Each of the original photos shows the real world desolate and filled with rubble, but the drawings added to them seem to spring from the children’s imaginations.

One picture shows a boy looking skyward, with a large bunch of balloons tied next to him. A cloud and rainbow flag have been added to a hole in the side of a side of a building, near a glass-less “window” where two boys sit. A young girl pulls a cart with large water jugs behind her, with a colourful path behind her springing up as if by magic. The short stick a running boy carries in another photo becomes the basis for a wheeled toy. Other pictures contain whimsical flourishes, swirls, and stars that I think wonderfully represent the holiday “celebration” and happiness that is missing from the photographs.

Eid al-Fitr, the “Feast of Breaking the Fast,” is a religious holiday that marks the end of Ramadan, the Islamic month of fasting. This year it took place on July 28.

This set of images is the first part of an ongoing series, which the artist calls Palestinians Teach Life. The other parts posted so far include The Full Scene from Gaza and Gaza Part 3. These other collages appear partly inspired by folklore and mythology, with unicorns, fairies, and a child transformed into Red Riding Hood appearing in the artwork. 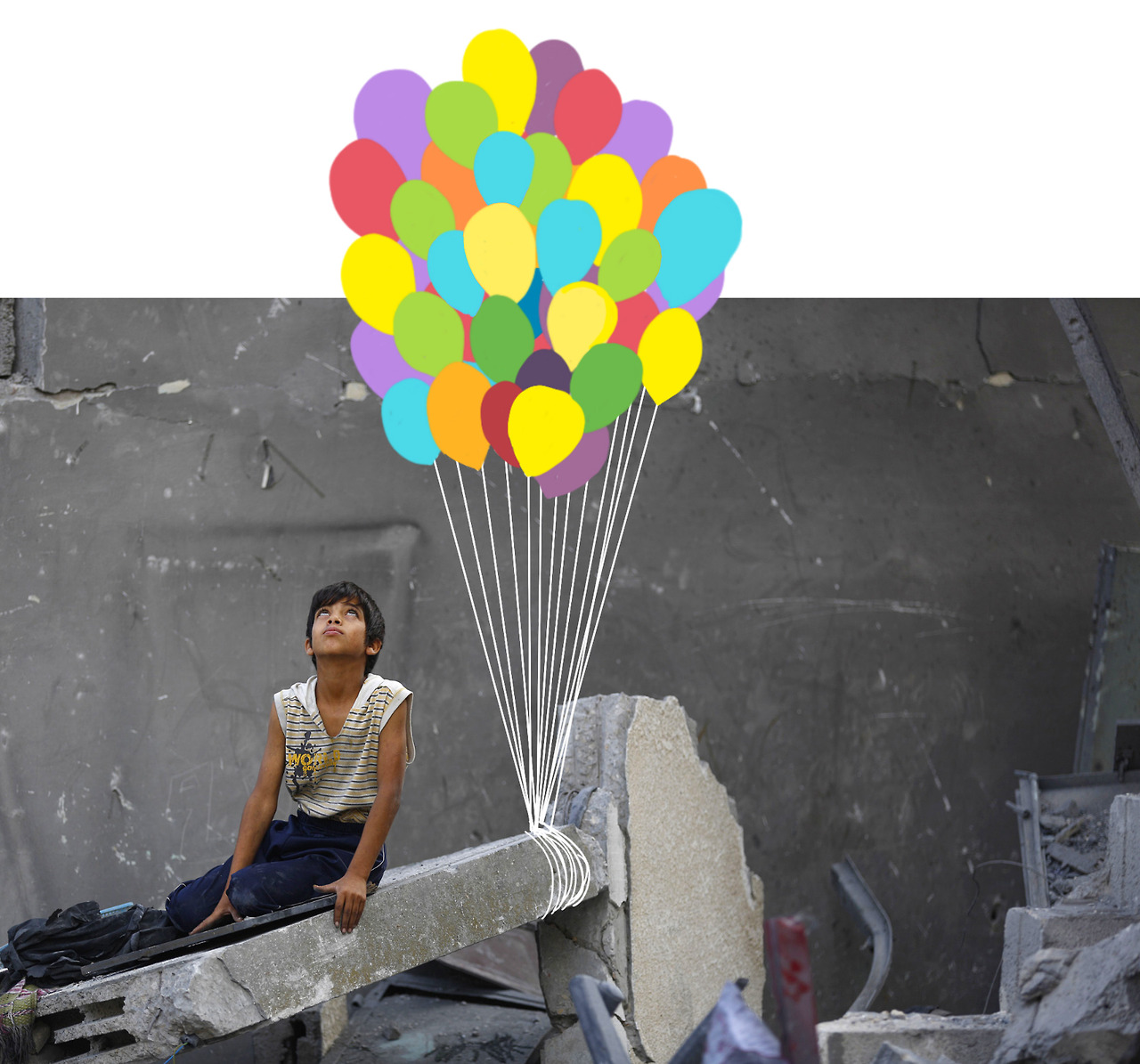 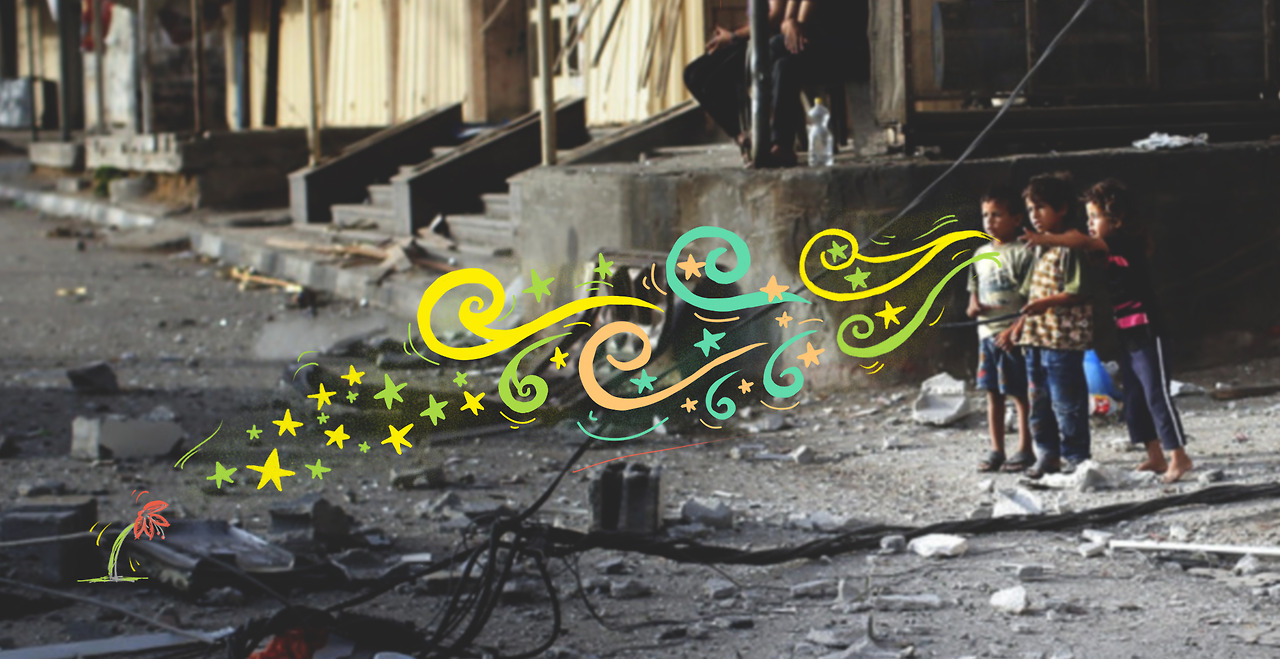 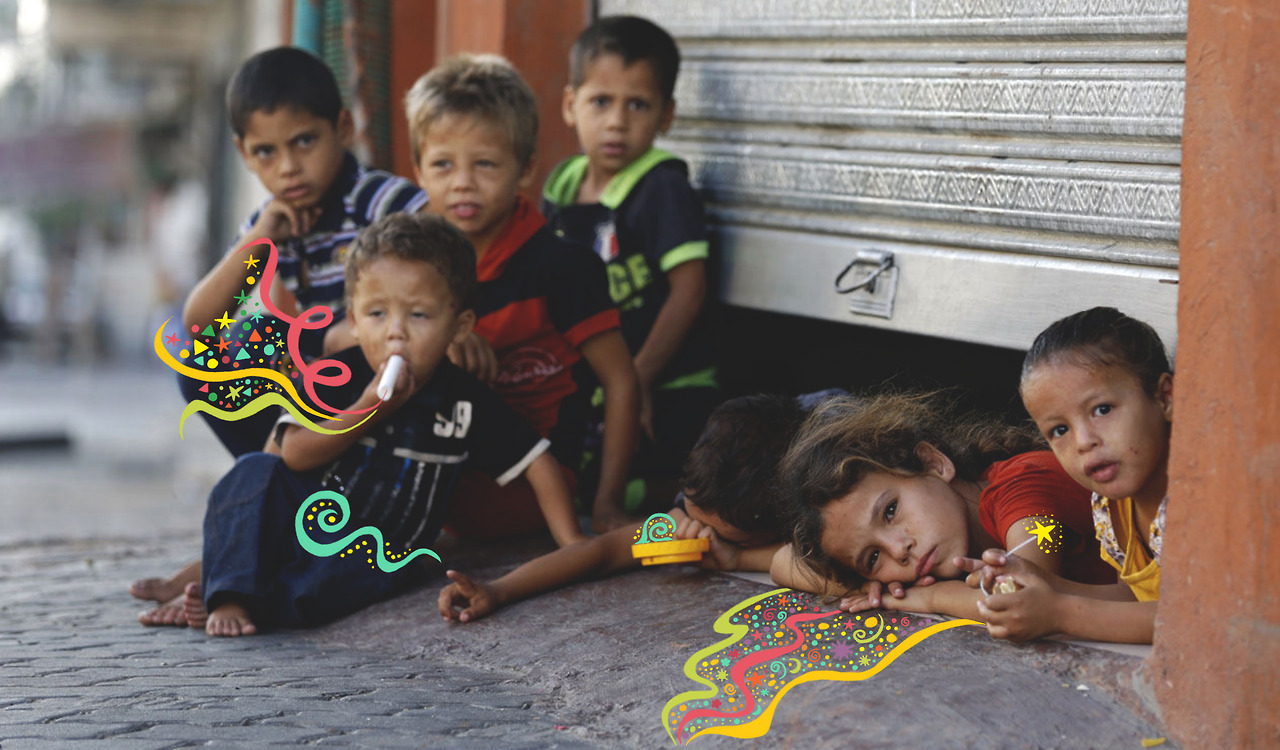 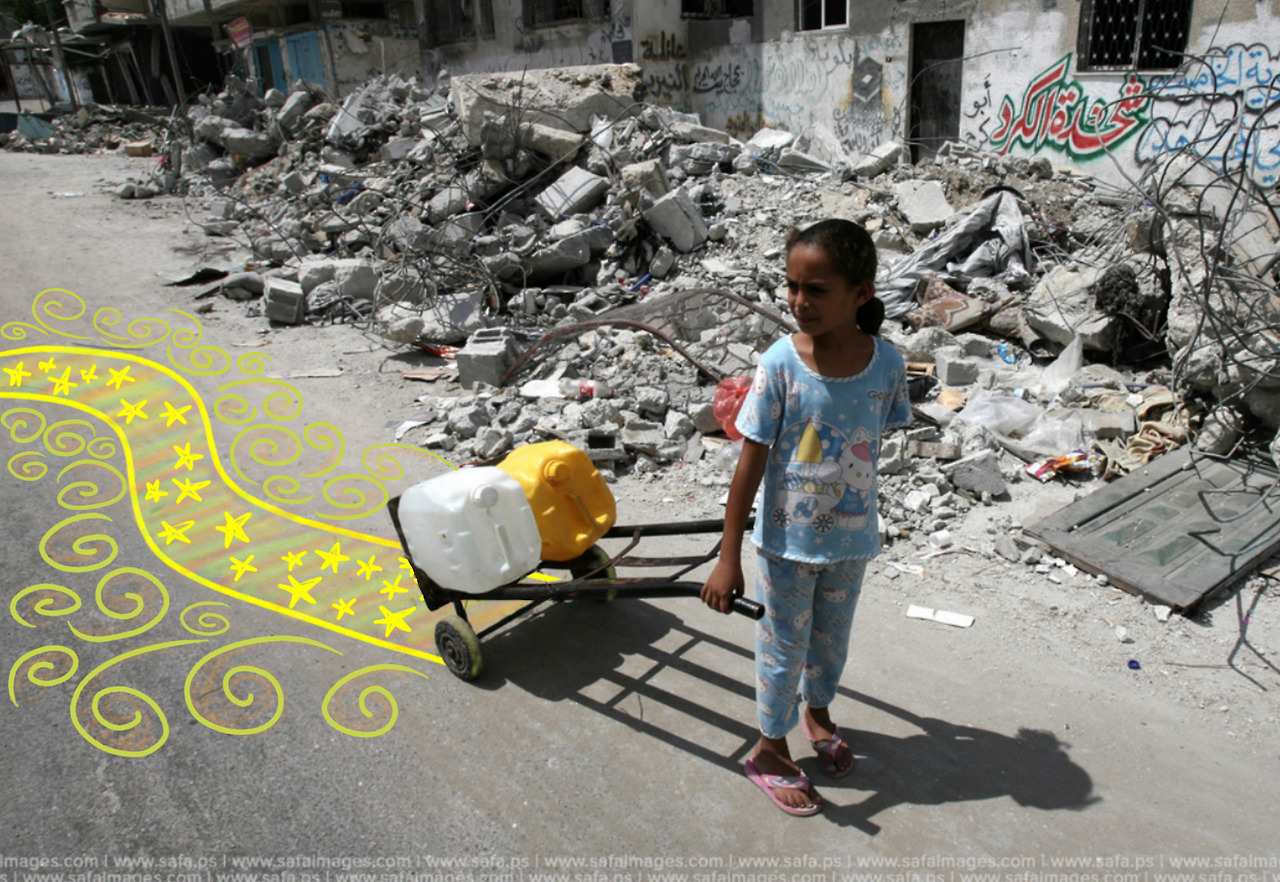 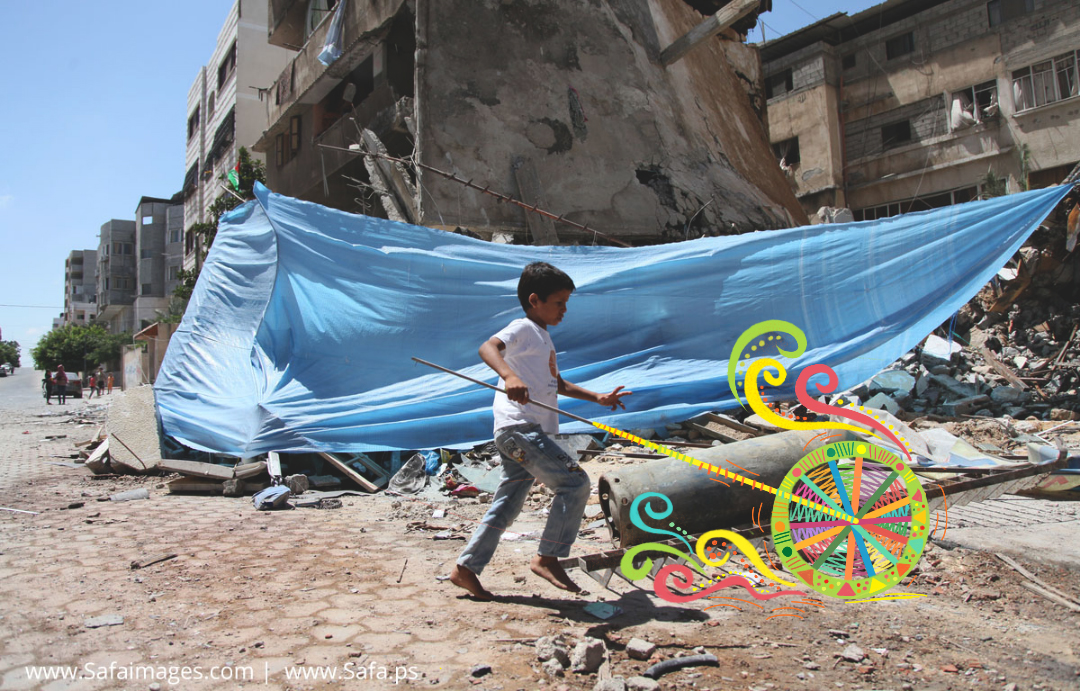 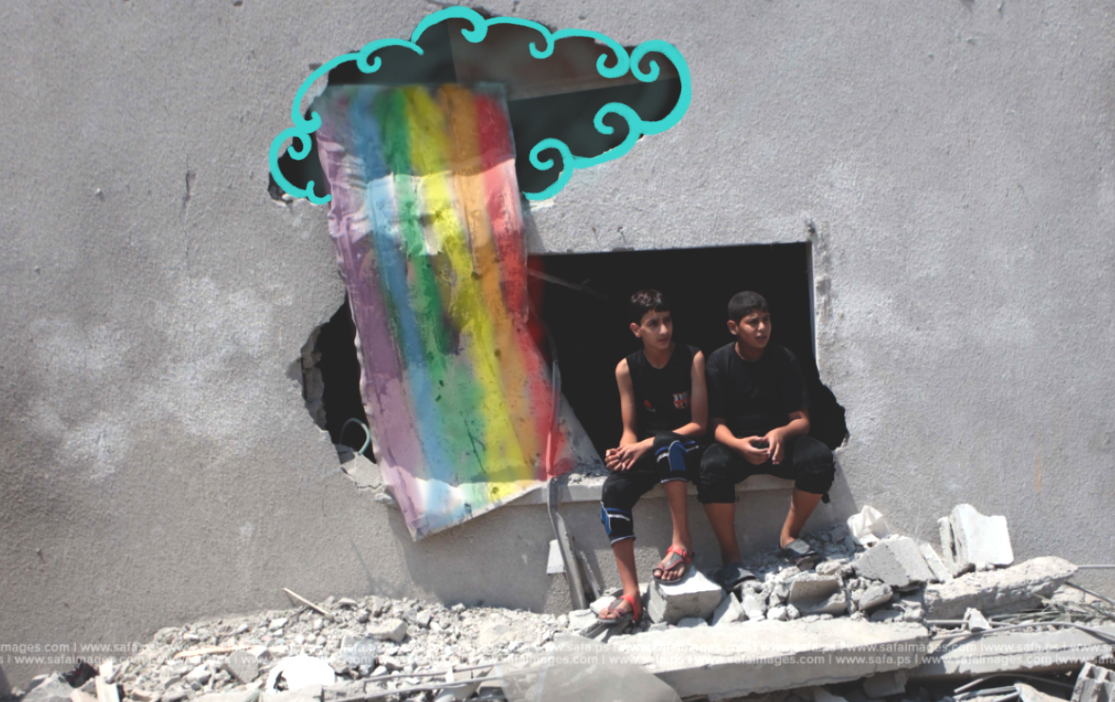 Rugs and carpets have long been an important part of Middle Eastern art and culture, from magic flying carpets in the Arabian Nights tales…